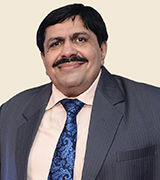 Dr. Shah has cured many patients purely with Classical Homoeopathic approach in the last 36 years of his practice. He specializes in the treatment of Bronchial Asthma, Behavioral and Psychiatric problems of children and Management of Cancer patients.

He has lectured at more than 500 Seminars in 22 countries in the last 30 years and is a contributor to various National and International Scientific Journals in the form of articles and research papers.

Dr. Shah has been associated with the setting up of various Educational institutions in the country and abroad, most notably Hahnemann College of Homeopathy in London that offers a Post-Graduate course in Homeopathy.

He further believes that one should keep on updating their knowledge and learning irrespective of age. Dr. Shah is currently pursuing a Ph.D. in Drug Proving. Even today, in spite of garnering immense knowledge and expertise, his thirst for learning continues.

He has won acclaim nationally as well as internationally for his contributions to the field of Homeopathy:

Dr. Shah has been actively organizing Seminars for the Homoeopathic Fraternity, featuring prominent homoeopathic physicians and clinicians. He has organized more than 40 seminars, ranging from a delegate-strength of 3000 to 100.

Dr. Shah, with incredible foresight and vision, created and developed a path breaking software called Hompath. It is currently India's "No. 1" Homoeopathic software and one of the major software in 88 countries across the globe with a user base of more than 33,000 doctors.

Hompath WildFire, the latest version, is estimated to hold the world's largest database, with more than 1000 books and other added features in it.

He has also made the homoeopathic world a smaller place by creating an online community www.homeopathycommunity.com, and effectively worked towards converging communication between homoeopaths all over the world. In his last 36 years of association with Homoeopathy, Dr. Shah has played and continues to play a major role in the development of the future of Homoeopathy in various capacities. He is, in the true sense, a global Indian.